Corelia Baibarac-Duignan and I wrote an Open Access article for Big Data & Society, on what we call ‘controversing’ . It was written as part of our NWO-funded project “Designing for Controversies in Responsible Smart Cities“. 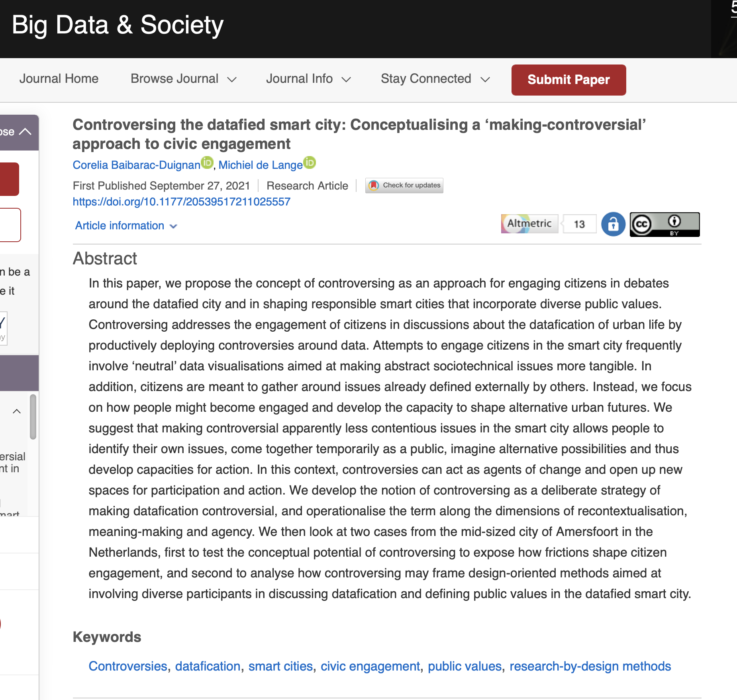 In this paper, we propose the concept of controversing as an approach for engaging citizens in debates around the datafied city and in shaping responsible smart cities that incorporate diverse public values. Controversing addresses the engagement of citizens in discussions about the datafication of urban life by productively deploying controversies around data. Attempts to engage citizens in the smart city frequently involve ‘neutral’ data visualisations aimed at making abstract sociotechnical issues more tangible. In addition, citizens are meant to gather around issues already defined externally by others. Instead, we focus on how people might become engaged and develop the capacity to shape alternative urban futures. We suggest that making controversial apparently less contentious issues in the smart city allows people to identify their own issues, come together temporarily as a public, imagine alternative possibilities and thus develop capacities for action. In this context, controversies can act as agents of change and open up new spaces for participation and action. We develop the notion of controversing as a deliberate strategy of making datafication controversial, and operationalise the term along the dimensions of recontextualisation, meaning-making and agency. We then look at two cases from the mid-sized city of Amersfoort in the Netherlands, first to test the conceptual potential of controversing to expose how frictions shape citizen engagement, and second to analyse how controversing may frame design-oriented methods aimed at involving diverse participants in discussing datafication and defining public values in the datafied smart city.