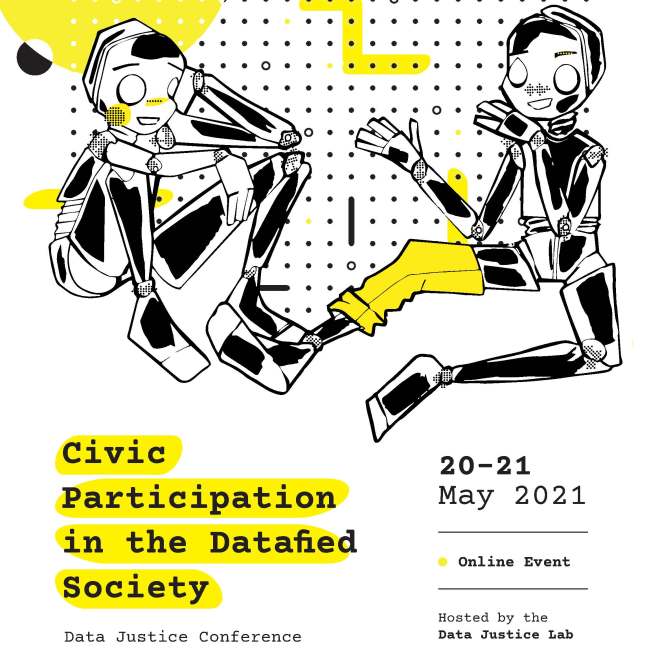 Corelia Baibarac-Duignan presented online at the Data Justice Conference 2021 on behalf of both of us. We submitted an abstract long time ago (mid Dec. 2019), before Corona, but of course then all events had to be cancelled or postponed, so this event took place online in May 2021.

The presentation was a pre-recorded one, in the “Civic responses, activism and countercultures” track.

“From controversies to controversing: infrastructuring civic participation in the datafied smart city”

In this paper we propose the concept of controversing as an approach for enhancing citizens’ agency, political engagement and capacity for action in shaping smart cities based on public values. Our theoretical and methodological contribution builds on literature about controversies and public involvement in issue formation from STS studies (Latour 2005, Marres 2007), and addresses calls from critical data studies to re-localize (big) data, specifically in the urban context when focussing on data in smart cities (Dalton and Thatcher 2014, McFarlane and Söderström 2017).

On a theoretical level, the concept of ‘controversing’ addresses the engagement of citizens in (discussions about) the datafication of urban life, and the possible roles of controversies around data for enhancing civic participation in the smart city. In attempts to engage citizens in discussions about datafication, the tendency has been to visualise data as a way of making visible more or less abstract socio-technical controversies (e.g., through controversy mapping techniques or artistic interventions). In response, we propose to ‘re-urbanize’ data by situating controversies around the datafied city in specific urban contexts and by understanding them as key actors in processes of democratizing smart cities. Moreover, current approaches to civic participation tend to place too much emphasis on individual agency. We instead argue that more attention must be paid to the conditions and infrastructures enabling and sustaining participation. Thinking about controversies as agents of change and an inherent part of socio-technical innovations opens up a space where new conditions and infrastructures for participation and action may emerge. In this context, we propose the term ‘controversing’: an iterative process of productively using controversies around urban datafication as a way of engaging citizens in shaping smart cities based on public values.

Methodologically, we contribute a research-by-design approach to explore ‘controversing’ from an empirical perspective through the development of experiential and situated co-design methods. The approach is aimed at involving diverse groups of citizens in shaping design interventions to tease out controversies as publicly debatable issues. This, we suggest, can expand citizen participation in issues of urban datafication by creating opportunities for the collective articulation of such issues and for acting on them. Citizens, in this view, do not only react to externally formulated controversies (e.g. ‘5G health hazards’) but co-produce means for collectively forming questions and publics around shared matters of (civic) concern. Instead of attempting to overcome these controversies, we argue for their productive capacity as ‘agonistic’ public spaces (Mouffe 2000).

We illustrate these points by introducing a ‘controversy walkshop’ method, currently prototyped in the Utrecht region of the Netherlands as part of an ongoing research project: “Designing for Controversies in Responsible Smart Cities”. This method combines data walking methods (e.g., Powell 2018) with co-design methods intended at involving non-experts and enabling the design process to continue beyond a project’s timeframe and user base (e.g. Björgvinsson 2008). Reflecting on the preliminary outcomes of its first iterations, we discuss the potential of using the method as part of participatory approaches aimed at infrastructuring (Björgvinsson, Ehn, and Hillgren 2012) smart cities based on public values.