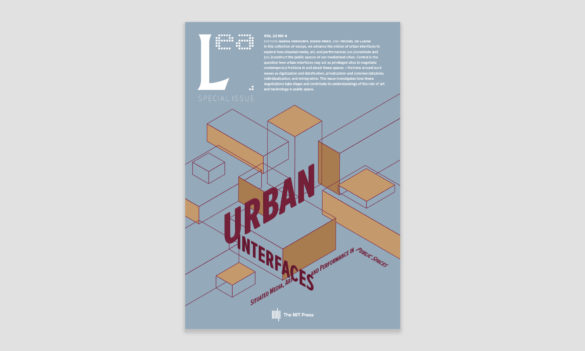 e currently wrapping up the last tidbits. See the special issue on the LEA website >>.

Among the contributions is our own introduction to the issue, called “Urban Interfaces: Between Object, Concept, and Cultural Practice.”

On Oct. 30 2019, we’re launching the special issue as a pre-event at the IMPAKT Festival in Utrecht. You are welcome to attend.

The issue approaches interfaces in a contemporary urban context, and explores the different ways in which situated media, art, and performances create, intervene in, and transform urban spaces. The contributions in this issue are aimed at investigating what interfaces, ranging from window facades in city streets to creative mobile apps, do; as well as how contemporary technological frictions, like digitization and commercialization, are negotiated in mediatized public spaces.

During this mini-symposium evening contributing authors Dr. Liesbeth Groot Nibbelink, dr. Eef Masson, and dr. Karin van Es will speak about their essays, artist Richard Vijgen will present his artistic practice and scholar in art, design and architecture dr. Katherine Willis will respond to the issue as a whole.

Entrance is free.
Afterwards there will be free drinks, after which the official opening of Impakt festival will start in the same building.