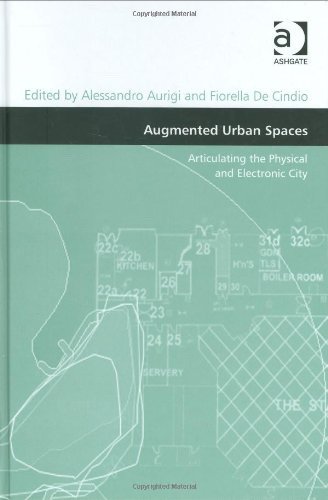 I posted this review on The Mobile City blog yesterday:

Aurigi, A., & De Cindio, F. (2008). Augmented urban spaces: articulating the physical and electronic city. Aldershot: Ashgate.
(The introduction is a free read from the website).

This book from 2008 had been on my desk for quite some time but finally I got around to do a review. It is listed in a recent overview of a decade of writing about digital cities. Three years earlier, one of the editors Alessandro Aurigi wrote the monograph “Making the Digital City: The Early Shaping of Urban Internet Space”.

The main question of this edited book is how enriched media environments, ubiquitous computing, mobile and wireless communication technologies, and the internet are modifying city living and the fruition of urban spaces. A familiar stance by now, the editors argue against a clear boundary between the digital and the physical:

“in the augmented city, ‘virtual’ and ‘physical’ spaces are no longer two separate dimensions, but just parts of a continuum, of a whole. The physical and the digital environment have come to define each other and concepts such as public space and “third place”, identity and knowledge, citizenship and public participation are all inevitably affected by the shaping of the reconfigured, augmented urban space” (p. 1).

The stated aim to strive for an interdisciplinary “contamination of perspectives” is attested to by the fact that Aurigi is an architect/urban planner and De Cindio a computer scientist. The contributing authors are a mixed bunch in both disciplinary and cultural background, although most have an academic affiliation. Architects, urbanists and geographers go side by side with new media and information- and communication researchers. Contributors hail from (or work in) Italy, USA, Canada, Brazil, Australia, South Korea, UK, and South Africa.

The book is structured in three main sections: Augmented Spaces, Augmenting Communities, and Planning Challenges in the Augmented City. I will not discuss all contributions but pick out those that I found most interesting.