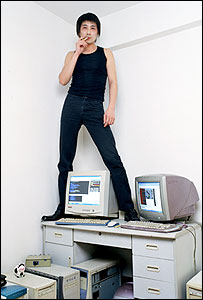 Wednesday evening, November 9, I was at the opening of the exhibition “Alter Ego” at Home Gallery. I was kinda late, supposed to meet my GF there at 21:30, but got stopped along the way by a police woman for cycling without light. She gave me a ticket, what a bummer… }:-(.
Anyway, the gallery is located in a nice old canal house between Leidsestraat & Spiegelstraat. About 25 large images are dangling from fish cords on the wall, each displaying a photograph of a ‘real’ person on the left hand side and a screenshot of his/her virtual personality on the right side. The split-images are accompanied by a text that tells the individual’s story: who he/she is in real life, who she/he is online in what game, and what motives he/she has for choosing this particular character.

The people portrayed are pretty diverse, considering that game culture appears to be mostly restricted to Asian and Western – American – cultures: there are pictures of physically disabled people, two black men, quite a lot of females (Asian & Western) and of course the (stereo)typical geek.

A lot of people make their online character into a ‘better self’: the men often create a sort of super-hero character and the women a strong, beautiful female warrior. Not everybody though: there is a portrait of this US redneck kinda guy who plays a beautiful heroine, and two good-looking Asian girls tell that they switched to playing ugly creatures after being harassed all the time by men in the game.

The stories can be roughly devided in stories that are about “becoming” in the sense of developing oneself: from being a bit shy at first to becoming more and more friendly and sociable, from being averagely handsome to being beautiful. Another theme is “escape”: escape from boredom (the trucker fantasising about playing a spaceship), escape from physical constraints (the handicapped people), escape from social/cultural pressure (the Chinese gay boy playing “guys he wanted to meet” & the US macho-guy playing a woman). The theme of “sameness” in the sense of “living one’s identity”, or simply “being” is apparent too: someone says he behaves the same way online as offline, and the Texan business woman tells she likes bossing around online just like in real life. Finally, attention is given to the economics of gaming culture: a few people explain that they make quite a bit of money from gaming, whether it’s by developing characters for other people, or by writing software that can upgrade players levels by playing for them at night, or a girl that has become popular through gaming and has become a professional model.

Some critical remarks: the split screen portayal of people & their online identity suggests that people have only one online identity instead of multiple. By choosing a form of presentation that juxtaposes offline and online identities, the artist stresses the devide between them in a visual way, although the artist probably intented otherwise. On the other hand, the split-screen portayal suggests that offline and online characters are equal in some way: the online character being the ‘mirrored image’ of the real life character. And finally, the artist seems to have deliberately wanted to portray a diverse group of people, while underplaying the homogeneity of game worlds, as apparent from one of the group photo of an ‘old’ game guild (I forgot the name) that is almost totally white and predominantly between 20-40.

The exposition is sponsored by EA (Electronic Arts – the largest (?) and best-known game developer in the world); Playstation2 by Sony. The gallery itself is a space owned by Dutch party/event-organiser Duncan Stutterheim from ID&T. Certainly no marginal players in the leisure economy …;-)

The BBC has an article about the project: news.bbc.co.uk.

The pictures (and even some more than exibited) + stories can be dowloaded as a PDF file from
www.seeingtakesasecond.com/images/examples_preview.pdf (9 MB).